I’m honored and delighted to have received the International Alliance for Women in Music‘s Pauline Alderman Award for Best Scholarly Article or Book Chapter for “Women at the Pedals: Female Cinema Musicians During the Great War,” which appeared in  Over Here, Over There: Transatlantic Conversations on the Music of World War I, ed. William Brooks, Christina Bashford, and Gayle Magee, University of Illinois Press (2019).  You can read an uncorrected proof copy of the chapter here.

The jury writes: “This book chapter investigates the women composers/improvisors who accompanied silent films during the First World War while the men were away at war. Their music, publications, and technical inventions (such as patents for piano roll systems) have previously been overlooked.  Kendra Leonard’s research sheds a fascinating light on the role that women played in developing film music, demonstrating women’s pioneering, transformative, and subversive efforts. The work is meticulously researched and wonderfully written.  In the words of one adjudicator, ‘The author makes a very important and strong contribution to the scholarly understanding of women and gender and music. In the process, Leonard recuperates a forgotten history and opens the door for more research to emerge.'” 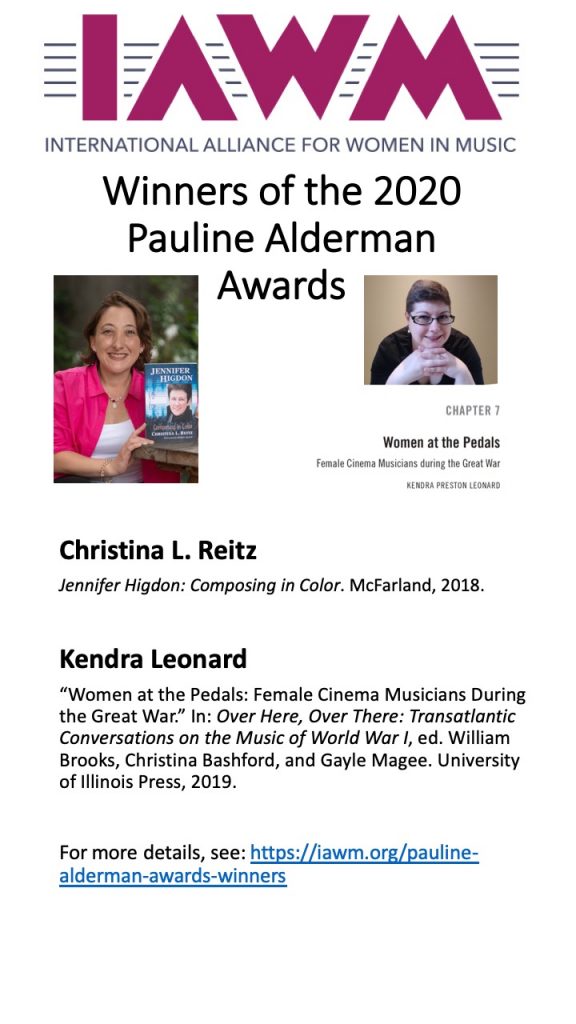 Top
This site is part of Humanities Commons. Explore other sites on this network or register to build your own.
Terms of ServicePrivacy PolicyGuidelines for Participation
Skip to toolbar